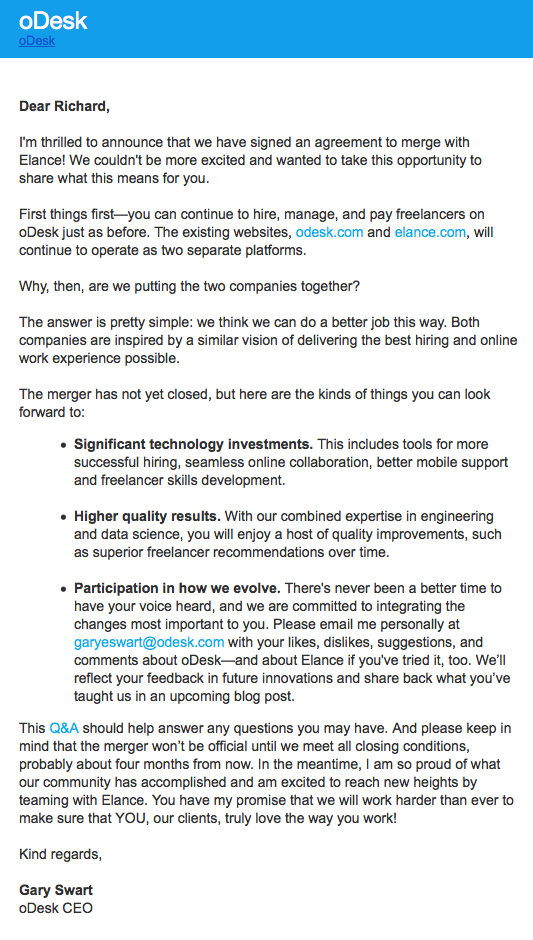 There are loads of ways to outsource a website or to find one to build. From oDesk to Elance to Freelancer to 99designs – all of these services take a commission of about 10% on each project and all have great project management software built into a solid feature set. The numbers don’t lie – these outsourcing portals are making big bucks.

Of course website managers must beware when contracting new individuals to work on precious projects for existing clients, and subcontractors looking for work through these job boards are subjecting their reputations to contractors who they know nothing about. Keeping a few basic precautions in mind, however, website managers can play both roles with aplomb:

Freelancers are working for freelancers – The majority of contracts signed on these sites are contractors hiring subcontractors. By understanding that everyone is in the same boat, your sympathetic approach will be reciprocated in kind.

Start Small – Freelancers know it takes time to build a good relationship. In fact, they’ll tell you they don’t want to commit to a big project without first running a test. It is in everyone’s best interest to protect their publicly reviewed reputations.

Communication is King – We can’t stress this enough for all parties involved. An email every day is enough to make everyone feel like they’re on the same page. Inevitably, when something goes wrong in a contract it’s almost always because one of the parties didn’t communicate in a timely manner.

Good reviews matter – At the end of every project, your next project is only as good as the footprint left behind on the last. Yes, it’s social reputation management through the positive feedback left on the project. The reviews tend to be extreme, so it’s either five out of five stars or zilch. Be prepared for blowback when panning someone. Revenge can be a bitch.

Build a team – Think of these services as a dating website where you keep your favorites in a folder to call on in the middle of the night. The best success will come from repeated success.

Remember that these communities of users survive and thrive primarily because they are tightly knit and fair. There’s no room for big egos or jerks. There are plenty of cynics who find the experience using these portals to be less than satisfying. Qualified applicants are as difficult to find as qualified projects, so respect for all participants will take you to success.

My grandpa used to say the difference between reading a magazine and a newspaper in the bathroom is the same as using a mallet or a fly swatter to kill a fly. If pressed on the vague analogy he would stop short of crudeness saying something along the lines of “we never had toilet paper in those days.”

We are inundated with the solutions to non-problems. One example is how our media outlets extenuate these non-problems by pushing the wonderfulness of phone apps, and last week’s New York Times article by Paul Boutin is a case in point. Putting aside the naivete (he obviously doesn’t use his camera) that 60 megabytes per month is sufficient storage, or even that a paid gigabyte per month would be enough, he does admit the casualty of putting yet another utility on your phone.

The only real downside with Evernote is that it has so many features, which can make getting started with the app daunting. But once you understand how to do a few things with it, you can get working and worry about the rest later.

Complicating our lives with an ever-expanding array of bells and whistles, feature creep is the scourge of us all.

The worst thing a website can do is to do too much. Companies like Apple and Google have succeeded by stripping down features and relying on interface simplicity. We should do the same with the devices we overlay on our lives. It’s one thing to enjoy the quirky features and fun modes that apps provide on our mobile devices, but it’s quite another to buy into the notion that loading another app on your phone is going to simplify your life.

The Internet started as an anything-goes place for design expression, a place where web designers could try out flavors of communication, then evolve useability standards in unique ways. Throughout the 1980s and 1990s there was a sense of progression both organic and accepting. Failure was measured in terms of not trying. There were no standards, so that web designers could try anything. Today, the commodity that is web design has turned against experimental design in favor of prefabricated templates based on compatibility with Drupal, Joomla and WordPress. Too often, "good design" is based on the generic website design: Social media icons, search box, menu, slider, blog section and footers. We web designers should celebrate the innovators who break with standards and innovate interface. 1980s web designs During the peak of the nylon era, the Internet was...

A forensics firm recently reported that Snapchat photos don’t actually disappear. Questions about Snapchat’s ownership are not disappearing either. The presumed co-founders turned down Facebook’s $3 billion offer while tangled in legal depositions defending their claim on the company. Business Insider reported the shocking admission by Evan Spiegel, Snapchat’s 23-year-old CEO, that Reggie Brown came up with the idea for Snapchat. Reggie Brown doesn’t work at Snapchat and says he was cut out unfairly. In the meantime, the distraction is keeping Snapchat from rightfully selling the business.

We recently decried the solitary webmaster myth where inventors don’t get the credit they deserve while others cash in on the idea, assuming credit for themselves. It calls to mind the movie Social Network, where Zuckerberg offered a similar apologia: “You know, you really don’t need a forensics team to get to the bottom of this. If you guys were the inventors of Facebook, you’d have invented Facebook.” While Spiegal refutes that Brown deserves anything, Snapchat will likely be forced to compromise, partitioning their future fortunes before company audits are recognized as accurate.

Greed has returned to Silicone Valley
Like most twenty-something Stanford University graduates, money was never much of an issue for current Snapchat owners Evan Spiegal or Bobby Murphy. At this juncture in their business path, these guys are all about power. Snapchat is much bigger than their 30 employees. Having raised $60 million from investors last June, Snapchat was already an $800 million company with 20 million photos being shared per day through their service. According to The Wall Street Journal, Tencent and other investors approached Snapchat just a few months later with a $200 million infusion for Snapchat, which would value the company at roughly $4 billion today. Jennifer Van Grove (@All_Trends_IT) cleverly summarized the Facebook snub: “Snapchat, true to its form, discarded the deal just as it does the 350 million messages it handles every day.” Spiegal and Murphy’s unwillingness to share power or take a large payout demonstrates a growing shrewdness buttressed by idealism.

When will Snapchat sell out?
Snapchat perfectly embodies the Peter Pan generation, young adults who can afford to say no to money because of silver spoons wedged in their mouths. This generation is also characterized by a believe that their own genius is singularly responsible for their success. Many have never needed help outside family and social circles, and when they do get help they are careful to maintain control over their own destinies. They can afford to take gambles, and they have demonstrated their go-it-alone approach. Snapchat’s current owners believe they deserve a big league promotion on their own. They’re not selling out, but current legal problems and a shift in popularity of their platform could prove they missed an opportunity to share the wealth while partnering with an established firm willing to make them billionaires.

Ultimately, while it is easy to pull apart these arguments, the actual real history of entrepreneurial firms tells us that most of them succeed by cooperating with established firms …. As a person responsible for much of that research (see here, here,here and here to name but a few), let me tell you that the struggle in getting acquired is getting a big payout from stronger incumbents; something Snapchat, like Groupon before them, seem to have overcome. To be sure, there are companies like Google and Dropbox (who each turned down a small amount), that end up doing quite well. But they are the exceptions rather than the rule. Snapchat may prove me wrong but I have to say, kids, you should have taken the money.