Haters of Cheesecake Factory in Greenville? Let’s just get things straight. The Cheesecake Factory in Greenville is the only restaurant on the magazine’s Fortune 100 Best Companies to Work For list. We should also add that the 21-page menu is 250 items strong and the Miso Salmon was inspired by chef Nobu Matsuhisa’s signature dish, Nobu being one of world’s best-know sushi restaurant located in New York City. The sweet and savory fish dish has been the favorite staple of housewives from Simpsonville, one of whom claimed to have gained 5 lbs during a single binge session at a Cheesecake factory in Charlotte, NC.

“I just bought the iPhone 6 because it has a panorama function, so now I can take selfies again,” she said wryly.

How a Cheesecake Factory waiter was dry raped in Phoenix 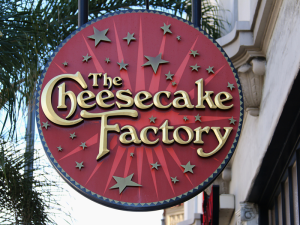 favorite of ours, but we have to wonder about the pressure managers are putting onto their staff when news reports criticize the means by which some waiters will take to keep up service at tables. Just ask Bryce Fitzpatrick who was working at the Cheesecake Factory at Chandler Fashion Center in Phoenix, Arizona.

“About 10-plus cooks and dishwashers shut the lights out,” Fitzpatrick recalls. “A guy grabbed me from behind and made me put my butt on top of his genitals.” –SOURCE

According to an interview with the bewildered waiter those attacks happened more than 20 times and other co-workers confirmed his claims that “A cook would stand in the middle and rub his genitals into my genitals.” Uh …. CHECK PLEASE!

How a Cheesecake Factory waiter got fired in Atlanta

So, this story came from a rather reliable source during an especially unreliable night of drinking at Community Tap in Greenville, when my friend entered a Cheesecake Factory and sat by himself at a table. As he sat down at the table he accidentally knocked a spoon off the napkin and onto the floor. A waiter ran over and replaced the spoon with a clean one. “Do ya’ll carry spoons in your pocket like that all the time?” asked the patron. The waiter replied that it was part of Cheesecake Factory training manuals to increase efficiency by the simple fact that a large contingent of diners knock spoons off tables all the time – especially the kids.

My friend returned to ordering his meal when he looked up and saw that the waiter had a string coming out of his pants from the zipper. “All the waiters have these strings tied off at our knobs,” he confided. That way, we don’t have to touch anything when we go to the bathroom, and hence the “Employees must always wash hands” rule doesn’t apply. The staff saves hours of valuable work time each month. “Well how do you get it back into your pants after you’re done going,” my friend finally asked. “Not sure about the others,” the waiter smiled. “But I use a spoon.”]]>