Thoughts on Panhandlers in Greenville, SC …

While waiting at a cross walk heading to the Peace Center to pick up tickets for School of Rock, I see a guy reading a newspaper on the other side of the street. He’s a panhandlers in Greenville, SC. When it was time to cross the street, he folded the newspaper and put it under his arm and started tapping his cane with his hat out. I was in downtown Greenville.

I flipped him a nickle and that man took offense to my cheapness? Is flipping him a nickle rude? Shouldn’t there should be a litmus test when approached by these illegal panhandlers in the Upstate? I was downtown last week when one of the local hobbling hobos comes along and I have to resist the urge to kick his crutches because I think he’s faking it. But then I feel really terrible at the same time because I don’t know how bad he really has it. I mean, that’s just a symptom of his desperation and we should have some sympathy for their situation.
And there’s this video on the Internet where this street beggar is squatting on the sidewalk. He’s holding his probing cane in one hand and a beggar’s cup in the other.
It’s called a white cane, and he uses it to help find his way.
Clean clothes, clean shoes. Nice backpack. He’s doing pretty well. But is he?
Well, a passerby decides to apply his own litmus test and rears back as if he’s going to kick the panhandler in Greenville. The beggar flinches hard in defense and it’s obvious he can see.
90% of all blind people are not totally blind…so, no, this is not a good way to test anything other than what kind of fucking asshole kicks a beggar, blind or not. Just move along you fucking psychopath. This is what small minded insignificant dickholes do to try and empower themselves because they have no personal power in the world, so they take it out on people who are in a worse off place than them.
But is it fair to apply a litmus test? I love how he is tapping the stick even tho he isn’t even walking.
It’s almost like it’s an effective way to draw attention regardless of whether he’s actually visually impaired. If you were significantly visually-impaired and reduced to having to beg to make ends meet, would you not use props people associate with blindness to draw attention? What else is he gonna do, carefully hand-letter a sign?
I mean, hospitals check for consciousness in a similar way. If you’re apparently laying horizontal on the bed, unconscious, they’ll raise your hand over your face and drop it, if you attempt to stop it hitting you, you’re awake. They’re not going to give you any charity if you’re faking it …
The fact of the matter is that our country gives, per capita, more humanitarian aide, handouts and social funding than any other country in the world. The real question is whether you believe in accountability for subsidies and handhouts, or if we should give without judgement or expectations. Luke 6:35 says love your enemies, do good to them, and lend to them without expecting to get anything back. Then your reward will be great. So, I guess I’ll concede your point that these homeless should be treated even better than our enemies. Certainly, we shouldn’t expect anything in return when we give. But is that realistic in this day? 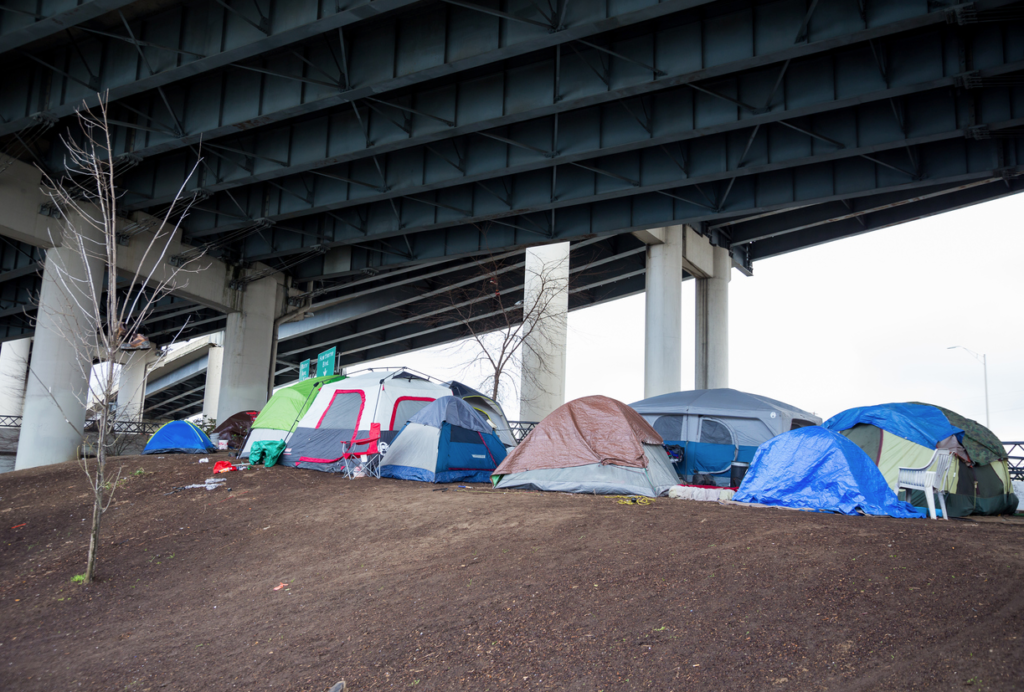 Tent City that popped up next to the Amtrak station in Greenville under the Pete Hollis bridge. Many Panhandlers made their base here in Greenville, SC

There’s an interesting story about a Tent City that popped up next to the Amtrak station in Greenville under the Pete Hollis bridge. There’s a new brewery called Birds Fly South located in the revitalized business district called Hampton Roads, just a stone’s throw away from the site of Tent City. About 10 years ago the encampment started to grow larger until there were scores of tents and a makeshift kitchen providing rudimentary comfort to Greenville’s disaffected. Eventually, an article ran in the vernerable Greenville News regarding the Tent City and donations began piling up under the bridge. Canned goods, mattresses, clothing, sleeping bags and everything but the kitchen sink and toilet. That seemed to be the tipping stone for the City of Greenville, by the way. There is a threat of disease when basic sanitary needs are not being met, and the City moved in and shut it down by offering bus tickets out of Greenville for those who wanted them, and homeless shelters to those who wanted to stay. Greenville launched a successful model called “Housing First” based on models in the Western part of the country. This theory has it if you give them an apartment or house first, then they can start to put their life skills back in place for stable living, according to society’s standards.
Will I teach my 4 year-old that he should get walked over by panhandlers in Greenville, SC? I don’t think our country is at a place where they are ready to embrace the central tenets of Jesus Christ. Turning the other cheek and giving everything away to follow Jesus is not the red letters our religious right is embracing. This is an Old Testament country who hide behind Deuteronomy when the red letters don’t meet their wanton ways. So, should panhandling be illegal in Greenville?
Greenville has one place using the Housing First model. It is Reedy Place with 23 beds specifically for chronically homeless people who have a mental illness. The homeless coalition believes the county needs an additional 35 beds. The cost of such a facility has not been determined, Lehman said. He said with the improving economy, the people homeless in Greenville County now are mostly those who have some sort of addiction, mental disability or mental illness. Previously, homeless agencies had been seeing people who had never been homeless before, who were thrust into the system by a lost job or serious medical problem. Reedy Place opened on North Calhoun Street near what is now the Kroc Center in 2005 with 15 apartments at a cost of $1 million. Another building with eight units, added in 2009, cost $624,000. The buildings look like an understated apartment complex.

https://greenvillejournal.com/2016/01/01/6471/ – The Upstate region covers 13 counties. Abbeville, Anderson, Cherokee, Edgefield, Greenville, Greenwood, Laurens, McCormick, Oconee, Pickens, Saluda, Spartanburg and Union counties. Among the 1,829 homeless in 2016, 251 were “chronically homeless individuals, 246 victims of domestic violence, 207 households with at least one child, and 141 veterans,” according to United Housing Connections.
https://www.greenvilleonline.com/story/news/local/2015/05/07/homeless-agency-greenville/70978654/ – Another model, which has been adopted in recent years by dozens of cities and the state of Utah, is known as Housing First. In other words, get people into housing and then deal with whatever left them without a place to live. They are guaranteed a place to live whether they confront their problems or not. The term Housing First derived from a program established in Los Angeles in 1988 that focused on homeless families. Programs in Toronto and New York City with a similar method focused on homeless people who are mentally ill. One of the more notable efforts began 10 years ago in Utah. Since then, the number of chronically homeless people in the state has decreased by 91 percent. Chronic homelessness, according to the federal government standards, means being homeless for a year or four times homeless in three years.]]>