(*Note: An earlier version of this blog incorrectly listed Greenville city council as the owner of the 1996 resolution opposing the gay community. WebDig apologizes for the error.) Greenville county* council passed a resolution in 1996 stating “lifestyles advocated by the gay community should not be endorsed by government policy makers, because they are incompatible with the standards to which this community subscribes.” Stop the bullshit before the below businesses punish the Upstate and all of South Carolina for being a discriminatory state!

“Put simply, HB 2 is not a bill that reflects the values of our companies.”

Businesses threaten to punish Greenville, SC for being anti-gay:

So far, Greenville’s wise new blood in county* council has sat back and ignored the recent segregationists’ bandwagon that seeks to make the LGBT community second-class citizens by implementing HB2 (The Bathroom Bill). Could it be that Greenville’s political and business leaders heard about Bruce Springsteen’s cancellation of a concert in North Carolina last week or PayPal’s withdrawal of a business plan in Charlotte at the same time?

Responding to the idiocy of Spartanburg’s Senator Lee Bright who introduced a bill on South Carolina’s Senate Floor (See full text of bill S. 1203) Gov. Nikki Haley gave a press conference about how nobody in South Carolina has reported their civil liberties being violated. “The transgender bill is unnecessary,” Haley finished.

Hooray for Governor Haley who stands against making stupid resolutions against the Greenville Gay Community!

Why this is not a Christian issue anymore

In years past, the Christian community stood united against homosexuality and other perceived non-traditional lifestyles such as integration. However, times have changed and Christians in Greenville, SC and throughout the country have progressed to understand homosexuality is a reality and that Jesus Christ loves all His people.

First Baptist Church in Greenville, S.C., approved an affirmation that: “In all facets of the life and ministry of our church, including but not limited to membership, baptism, ordination, marriage, teaching and committee/organizational leadership, First Baptist, Greenville, will not discriminate based on sexual orientation or gender identity.”

Times have changed and our progressive society understands our lifestyles are what make people unique and accepting.

Be careful when you disagree with gay friendly companies who are looking at Greenville to establish new business.

Not only do those who run web design companies in Greenville support the LGBT community, but huge companies like PayPal avoid haters as was demonstrated in Charlotte earlier this month.

“Two weeks ago, PayPal announced plans to open a new global operations center in Charlotte and employ over 400 people in skilled jobs.  In the short time since then, legislation has been abruptly enacted by the State of North Carolina that invalidates protections of the rights of lesbian, gay, bisexual, and transgender citizens and denies these members of our community equal rights under the law. 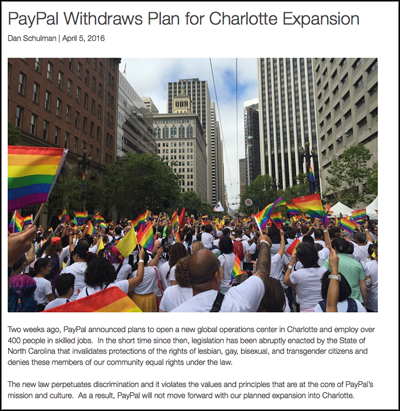 The new law perpetuates discrimination and it violates the values and principles that are at the core of PayPal’s mission and culture.  As a result, PayPal will not move forward with our planned expansion into Charlotte.”
–Dan Schulman, President and CEO, PayPal

People do not accept the role of second-class citizen, says Kittredge McFadden who blogged many of our disgruntled attitudes toward a county* council who has both shown amazing forsight and community planning wisdom in attracting new business and also demonstrated acumen in developing a marvelous infrastructure of buses, roads and bike paths – but who also has a history of enforcing draconian Old Testament dogma.

In Greenville County, S.C., there exists three self-proclaimed gay bars, one gay bookstore, several gay-owned and operated businesses and international corporations that understand the importance of including sexual orientation in their non-discrimination policies. In fact, some of the larger corporations (Fluor, Daniel, Michelin) include domestic partnership benefits.

The Greenville gay community has historically sat back and let the old-timers have their way with passing draconian resolution that seek to hurt their way of life. But more and more businesses are socially active and will pressure cities and states to do the right thing. 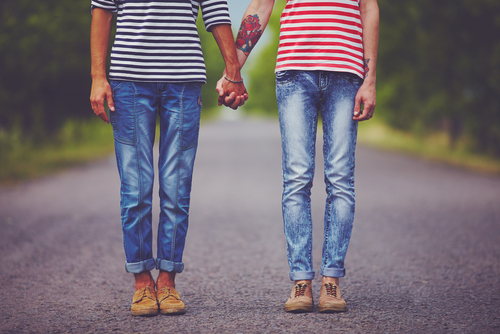