What are sham bills?

In South Carolina we have politicians proposing legislation that implies that the impossible is possible. Sham bills are for showboating and making a point to waste the time of the South Carolina State Legislature.
Politicians are introducing these sham bills and the media responds with shocking headlines meant to garner clicks without effecting real change or advancing constructive dialogue.

The most recent sham bill seeking “to prohibit the state from respecting, endorsing, or recognizing any parody marriage” may garner backslapping appreciation from political wonks, but voters are growing tired of this liberal waste of time at our expense. 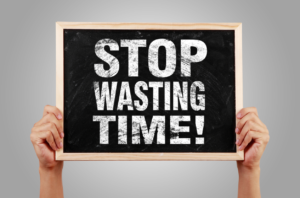 South Carolina’s State House representatives who have sponsored the “Parody Marriage” bill are shamming you:
▪ Steven Wayne Long, Spartanburg District 37
▪ William M. “Bill” Chumley, Spartanburg District 35
▪ James Mikell “Mike” Burns, Greenville District 17
▪ John R. McCravy, III, Greenwood District 13
▪ Josiah Magnuson, Spartanburg District 38
▪ Richard “Rick” Martin, Newberry District 40
These pointless sham bills they’re introducing are appalling not just for the impossibility in becoming law, but for their blatant plagiarism. The least our representatives can do is find original ideas when pandering to political idealism. The six South Carolina sham bill sponsors didn’t even bother to credit two Wyoming legislators who already proposed the same bill called the Marriage and Constitution Restoration Act (HB0167). That bill died quickly and the pirated version introduced in South Carolina will undoubtedly meet the same fate.
Both bills were originally authored by Tennessee attorney Chris Sevier, best known for wanting to sue Apple for making computers that allow access to pornography. At least Sevier is being original in wasting our time. He’s also the anti-gay activist who tried to marry his computer to make a point. Farce and showboating is entertainment, indeed. But let’s keep the entertainment out of South Carolina politics.

These pointless sham bills they’re introducing are appalling not just for the impossibility in becoming law, but for their blatant plagiarism.

Politics should be based in realism, not idealism

Political idealism deals in sham bills rooted in the fantasy world. Political realism sees things as they are using empirical data – the best political science. Political philosophy is based on hopes and dreams.
We have idealists in the State of South Carolina who are commandeering the good work of realists who are effecting real change. Good politics is based in realism.
Now, idealism should be encouraged. It has its stage. Children are taught to dream. But when it comes to getting things done – cleaning up our room – we approach the task with reason and real change. Nobody is saying that in the realm of politics we should sacrifice all ideals for the sake of reality. But local politicians do not have the originality or standing to dream at the expense of our tax payers.

Vote the sham legislators out

Legislators who are introducing sham bills for the sake of stroking their own egos and who are imagining they are political philosophers within the South Carolina General Assembly should be voted out of office. Ideas not based in reality – the what could be perfect for my idealistic vision – have no place in local and state government. Their strategy should not be what could be in an alternate universe. Rather, the politicians who are laying out strategies based on facts – based on the way things are – are the ones we should keep in office.
Our best politicians are the ones who are sacrificing their own ideals to progress for the general good. Getting on with your job as an elected official and ignoring the “push-button” political discussions (primarily those around guns, immigration and abortion) represents the better part of valor for the politically elected. Stop looking at the stage of national politics and trying to make our small world of local issues about those things. Go to a school board meeting, a city council meeting – see South Carolina’s elected officials who are doing the real work to get things done without inserting their ideals. Let’s be clear here – most of our local politicians in South Carolina are doing a terrific job of working out agendas that support and progress our state’s best interests.

Who’s getting it right?

There’s a political blogger in Columbia named Will Folks who you may know by his unfairly balanced website at FitsNews.com. He’s a realist who holds accountable those who are based in political idealism. He calls out conservatives who are liberally wasting resources. He asks again and again the question “Is this realistic?”

An aspiring governor pandering to populism 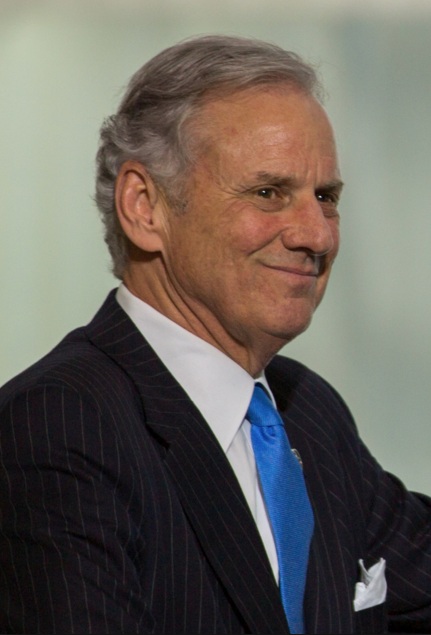 Now, let’s take the example of a local politician who is wasting our time – Governor Henry McMaster. Late last year the so-called Governor Foghorn Leghorn of South Carolina triggered praise from push-button voters after he issued an executive order cutting off all public funding to health care providers affiliated with abortion clinics in South Carolina. “Taxpayer dollars must not directly or indirectly subsidize abortion providers,” he said at the time. Of course he is correct. (One might agree with that statement or not.) But it’s all a sham, a political stunt and an example of how the governor is wasting taxpayer time and money to score political points with push-button voters. He’s not going to change federal laws by proposing sham legislation. Howabout getting our roads fixed?
Dr. Scott Sullivan, the director of maternal-fetal medicine at the Medical University of South Carolina was quoted in The State that they only terminate a pregnancy with a patient’s consent when that patient deems the procedure medically necessary – just a handfull of these happen each year. Governor Foghorn’s proposal to effectively ban all abortions in South Carolina is headed to the full Senate for a vote. One small problem … what they are calling the “Personhood Act” would ban the estimated 6,000 abortions performed in South Carolina each year – against federal law.

Stop wasting your time proposing legislation that is against federal law, Governor Foghorn!

Again, what makes South Carolina’s Govornor acts especially silly is how he has stolen the legislation from other states who have also failed at making real change to legislation because of idealistic hopefulness. Kansas and Missouri both tried the same thing recently. Guess what? It didn’t work for them and it is not going to work in South Carolina either. Sen. Thomas McElveen, from Sumter, told The State newspaper, “We need to do our job here. Our job is to get out as good of legislation as we can before we get it on the floor for debate.” 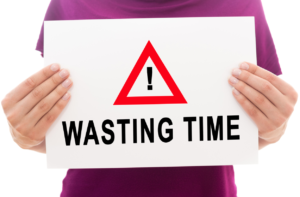 Now there’s an argument that says if you can change one woman’s mind by setting an example, then it’s worth all the shamming. Let’s have that argument. But know that the incremental change is at a huge expense to our society. Gov. Foghorn and his dreamers are having their storybook adventures at voters’ expense – while ignoring failing roads, failing infrastructure and a struggling education system. It’s all made worse by the fact that South Carolina’s populist politicians are introducing these sham bills stolen from the recycling bins of failed legislation in other states – all to appease the little minds who vote on singular issues in South Carolina.

If politics can teach you anything about holding public office it’s that there’s no success in imitation. After all, conservative voters know one of the very worst things to do is to do something very well that need not to be done at all.

South Carolina politicians who serve their constituents by proposing sham bills are wasting our state’s best resources. These elected officials are ignoring real problems when they propose sham legislation to garner headlines for idealistic point making.
Their sham bills may garner backslapping appreciation from their political wonks, but we voters are growing tired of their liberal waste at our expense.
The South Carolina General Assembly should apply conservative values and stop introducing sham legislation. At the very least, representatives – next time – should find some originality when pandering to political idealism.
MORE LINKS:
Political Realism and Political Idealism: READ MORE
Original Post: https://www.fitsnews.com/2018/02/22/letter-scs-circle-jerk-sham-bills/ 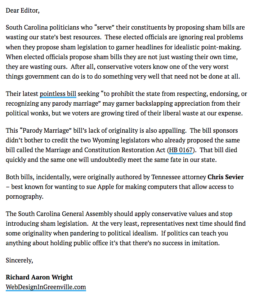