Along with chimney-sweeps and milkmen, cobblers are nearly extinct. They ply their trade in fewer and fewer places having been relegated to the hollows of New York City subways and discount storefronts in suburban rinky dink shopping centers. Nonetheless, a few shoehorns are steadfast in their trade, these indomitable and hearty cobblers demonstrating a resilience against the throwaway mentality our generation will be remembered for.

Cordwainers make shoes while cobblers resole, stretch, resurface, reshape and reheel them. Perhaps not surprisingly, some shoe repairmen are thriving with honed business models and steady revenue from mostly white collared businessmen. In New York City, for instance, financiers and bankers can’t seem to break ties with the healers.

Where have all the Cobblers Gone?

I went to shoe cobblers to get my shoes fixed while working on Wall Street in the 1990s, but what I learned from them changed how I view business forever. Sound business strategies and shoe maintenance have a lot in common. Long before I became a website manager, I built electronic trade order management systems for money managers, writing their specifications, designing their UIs and writing their user guides. Bankers and traders are a fickle bunch, their rapid-fireness and volatile natures mirroring the shark tank that is Finance. These investors are known for their unbreakable discipline and independent thinking – I got to know this regal class of businessmen during my formative years in New York City. 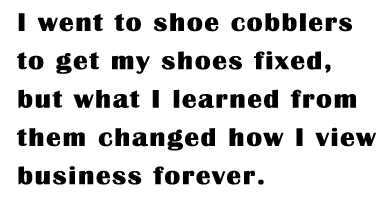 But there was one man smarter than the lot of them – someone I met when I was too broke to buy new shoes, so I frequented his shop called Minas Shoe Repair. Minas worked a lower concourse storefront at 2 World Trade Center. He was something of a sage when it came to doling out business advice, and the financiers trusted him. He was keen to splint Auden wingtips or buttress the foxing on Gucci toe caps. He advised that Italian wedges crack if you don’t fortify the welt, and he insisted on buttressing new soles with rubber so the tread keeps the ground away from the leather. He told me a few important rules for maintaining shoes, encouraging me to nurture them the way an entrepreneur nurtures a business. Here’s a few more nuggets of business advice I gleaned:

Minas knew that maintaining a smart business starts with fundamental analyses to identify strengths and weaknesses that lead to the achievement of objectives. For shoes, we want comfort, performance and good looks. Business is not much different, and looking good while making money remains clutch for our generation. Profits come by striking a balance between maximum returns and minimal sacrifice while looking graceful along the way. Likewise, nurturing a long life for a good pair of shoes follows the same model.

Minas had nurtured his business since 1969 when he began the long journey from his native Greece to America, arriving in New York with no money and little language skills. He first worked in a kitchen before he was able to save enough money to open a shop on 18th Street. But he aspired to bigger heights and by 1977 Minas Shoe Repair opened in the World Trade Center. He doubled the size of his business and sourced help to keep up with the growing clientele. He was thriving.

But then it happened.

Minas Shoe Repair was destroyed in the September 11th attacks. Hundreds of businesses were obliterated and thousands of workers were forced away from downtown Manhattan. The migration of the major investment houses Morgan Stanley, J.P. Morgan Chase, Citigroup and Bear Stearns occurred long before the attacks on September 11th forced the other big houses to follow suit. Over the years Minas had come to rely on the suits to keep his business humming, but he suddenly found himself – at the age of 60 – having to employ that advice he doled out regularly to his customers.

His regression toward the mean eventually took Minas to his current location on 67 Wall Street, but those tumultuous years following New York City’s biggest disaster nearly broke him. Stacy Curtin interviewed Minas in 2011 and wrote how he clawed his way out of near bankruptsy to return to his place of prominence as Wall Street’s Cobbler Sage:

And his customers come from all over the city and the outer boroughs. “I used to live at the Crest [apartment building] right next door. Now I actually live and work up in midtown,” says customer Noah Bogan. “I don’t really trust any other shoe repair shops, so I still come back here.”
– Minas Polychronakis

Our aptitude for grasping various methodologies in business comes from many places. There’s a lot to learn about strategy from the guys responsible for shoeing those who deal in quotes, spreads and margins in the ETF, IRS and FX markets. Traders and bankers know a lot about business strategy – sure, but how many of them have actually run their own business while plying their trade?

So when the going gets tough, the surefooted are the ones who understands the utility of a good pair of shoes – and the confidence to take them where successful business resides. 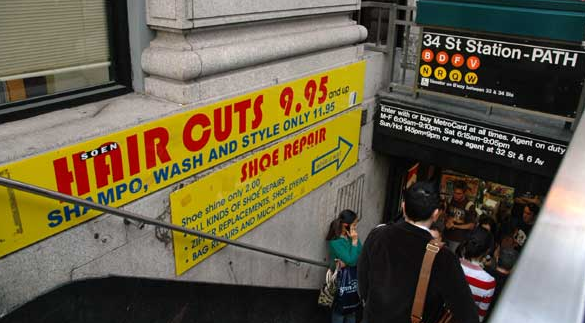