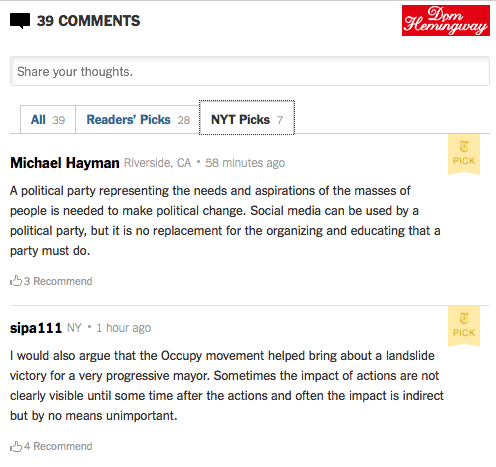 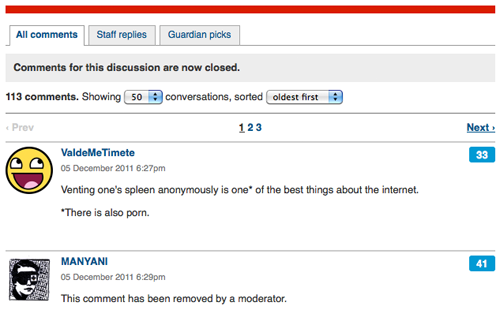 An assistant college professor named Zeynep Tufekci published an OpEd in the New York Times with the theory that social media is as helpful for organizing protests as it is hurtful to them. Because her understanding of social media is more Snapchat than Reddit, she offers that the Occupy Wall Street rally and the Tahrir Square protests failed to keep our attention because they were not organized in a fashion similar to the good old days of paper pamphlets and phone calls. New media, in her view, does not build infrastructure for “sustaining momentum.”

In fact, building new types of media infrastructure to support social causes has taken on a new urgency in places like Turkey, where the citizens’ access to Twitter has been limited. Business Insider reports people are getting around the ban by using anonymous VPNs and working text messaging services. Any website manager will tell you how dramatically their clients’ causes have been burgeoned due to the construction of strategic media infrastructure that innovates their old newsletters and brochures. History has shown again and again that innovation in technology evolves the way we effect change within our institutions – we just can’t fully appreciate it at the time. Gutenberg invented the printing press in 1445, but it’s the pioneering of how this process was used that impacted all our social and religious institutions in the centuries following. Antonio Meucci should have been credited with inventing the telephone, but it was Alexander Graham Bell who is commonly credited with inventing the device that commoditized voice communications. 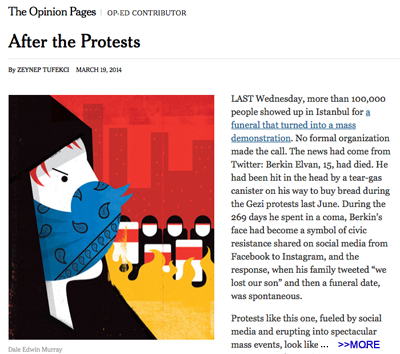 Professor Zeynep Tufekci joins a list of nearsighted educators (yes, they were all teachers) who just couldn’t grasp the impact of technology and the Internet:

Website managers are missing out on free money by ignoring their infrequently used websites and domain names. Services like CashParking will pay you up to 80% of the advertising revenue on your parked domain names and websites, although the upfront cost for the GoDaddy.com program means you better be sitting on a good URL. A better option may be Amazon Associates, which allows you to manage links and banners on your website or parked URL, earning up to 10% on purchases made during a user’s shopping session. Amazon offers total control to the website manager, and Darren Rowse claims to have made $119,725.45 by using their tools.

Where past empires were built on print, radio and television advertising, Google continues to rake in billions by evolving the advertising paradigm on the Internet. For this reason all website managers should be actively leveraging Google Analytics for the purpose of their bottom line. A website manager who doesn’t use Google Analytics is like a teenager without an iPhone.

If modern algorithmic marketing strategies seem overkill for what you want to do, just consider the way traditional advertisers spend money. Pick up a newspaper and it’s obvious what advertisements go where. Calculated guesswork for placing your own advertisements on a website are the same. For instance, segmenting a blog by categories of advertisements can align nicely with your own posting categories.

Don’t over complicate the advertising process. It starts as simple as placing your first banner and watching the statistics make you money or not. With success comes learning and before you know it, you’ll need algorithms to keep track of all the clicks.

Website managers are showing their teeth a year after Adobe's money grab. Despite popular media outlets who endorsed Adobe's marketing blitz that customers would love it, customers clearly do not. Last year the mammoth software provider declared an end to the install and said they would move to a subscription model whereby users would be required to pay a monthly fee for access to their software. The model is nothing revolutionary, but it does challenge the bank books for struggling website managers and small businesses who will see the cost of running software skyrocket because of the change. For Adobe Dreamweaver a one-time install ($239.88/year) versus the cloud-based annual subscription ($239.88/year) suggests you'll be paying a lot more for the cloud-based solution over time. Adobe counters that the software includes automatic updates as well as...

Photoshop has a built-in algorithm that locks the program when an image of money is opened. Google offers a plentiful selection of stock photos to get the counterfeiter started, however.

According to the Secret Service website it’s not illegal to take pictures or scan United States Currency provided that it is used to print counterfeit money “of a size less than three-fourths or more than one and one-half, in linear dimension, of each part of the item.” The bill also has to be printed one-sided, then the digital copy destroyed. Photos of coin, in their original size, may be used for any purpose. The only legal way to counterfeit money, according to the United States Secret Service, requires counterfeiting nickels and pennies. Here’s the official invitation:

Anyone who manufactures a counterfeit U.S. coin in any denomination above five cents is subject to the same penalties as all other counterfeiters. Anyone who alters a genuine coin to increase its numismatic value is in violation of Title 18, Section 331 of the United States Code, which is punishable by a fine or imprisonment for up to five years, or both.

The Central Bank Counterfeit Deterrence Group (CBCDG) is responsible for pressuring Photoshop and most photo editing programs to adhere to its counterfeit deterrence system (CDS).  While Photoshop doesn’t let you import images of currency, there’s no preventing coinage.

Despite the Secret Service’s invitation to counterfeit nickels and pennies, history proves the government unfriendly when the minting goes beyond a simple garage hobby. New Jersey native Francis LeRoy Henning pawned 100,000 nickels before drawing the ire of Uncle Sam. His 3 year jail sentence and $5000 fine didn’t warrant the investment.